Each new year brings an brand new and updated NHL game! What can we expect from this year's newest installment, besides the roste

r changes and other small tweaks? NHL 13 is an exciting game in the franchise, and is much more than just a new yearly installment. What changes are there to expect? What are the new features to be excited for. Take a look at the Top 5 Things You Should Know About NHL 13.

Re-play or re-create history! This mode allows for you to replay some of the most intense and thrilling moments of the 2012-13 NHL season! Choose from over 26 seperate events that occurried. Such as Gagner's historic eight point night or Crosby's return to the ice! Not only can you relive these moments from last year, but this mode will be perodically updated with new events that occur in the 2013-14 season!

Watching your plays between periods and having the ability to save replies is a great feature to include in all sports games. NHL 13 takes the presentation to a new level with lighting, stadiums, and the simulated 'broadcasts' of the games to be as realistic as possible. Now, after a period ends, you'll be greeted with a clip show of all your plays, cut together like they were a real broadcast. The real kicker is seeing the biggest or best highlight at the end of the reel, as the score fades in afterwards, with a surge of music to close the period out. It's about as real as things can get, except you don't have to wait through 6 minutes of commercials to keep playing! 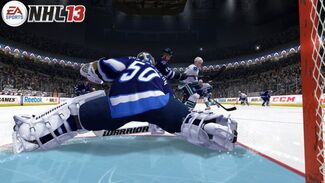 Goalies are now overhauled to look, act, and play like a true NHL goalie. Not only are goalie animations updates for more lifelike puck-grabs, pad blocks, and in-place skating, but controls have also been touched up for human players. In previous installments, the right stick controlled the goalie's gloved hand. The stick could be used to make manual grabs. This feature, however, has been replaced with a 'anticipate save' move. A flick in the right stick can help the goalie prepare for a shot from that direction, leading to cleaner saves.

2. Hockey IQ: A completely new and overhauled A.I. system has been implemented in NHL 13. Where AI would extend towards player positioning in old games, in NHL 13 players are now completely and fully aware of everyone on ice, both player and puck location at all times. This enhancement allows for all AI teammates and opponents to be quicker, smarter, and make more realistic decisions in game. With this AI upgrade, more strategies and plays are able to be called and preformed on the fly. Customize your own set of real-world hockey approaches and strategies and take your team to the top! 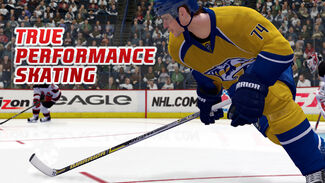 1. True Performance Skating: NHL 13 is in a completely new engine, which is driven entirely by real world physics. Not only are there more than 1,000 new gameplay animations (remember, that's JUST from NHL 12 to NHL 13), but a new system of on-ice movement has been created. With a focus on explosiveness, momentum, and top-speed, controlling on-ice skaters now feels enhanced and realistic. No longer can you skate to top-speed and expect to turn on a dime! Better care needs to be taken when considering your future moves. Going too fast can effect your turn radius, and each player's top-speed is linked to their real-world potential and preformance! Oh, did I also mention that you can now skate BACKWARDS at any time by holding L Trigger/L2? Try switching your skating directions during defensive and offensives rushes for best results!

Retrieved from "https://eanhl.fandom.com/wiki/User_blog:TheBlueRogue/Top_5_Things_You_Should_Know_About_NHL_13?oldid=4535"
Community content is available under CC-BY-SA unless otherwise noted.