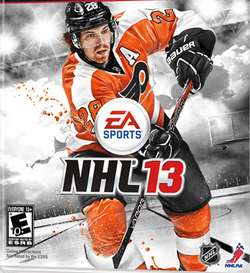 NHL 13 is an ice hockey video game developed by EA Canada and published by EA Sports. It is the 21st installment of the NHL series and will be released on September 11th in North America, and September 14th, 2012, in Europe. The game was released on the PlayStation 3 and the Xbox 360.

There was another yearly vote to determine the cover player. The voting began on March 29th, 2012 with 60 players. The total voting period drew nearly 25 million worldwide votes. Philadelphia Flyers star Claude Giroux was chosen over Nashville Predators' goalie Pekka Rinne in the final round. The cover star was announced at the 2012 NHL Awards in Las Vegas, Nevada.

Rögle BK will replace Djurgårdens IF in the SEL, due to the 2012 Kvalserien.

Players can now play the Winter Classic, both the 2012 game in Pittsburgh, Pennsylvania and the 2013 game in Philadelphia, Pennsylvania.

Retrieved from "https://eanhl.fandom.com/wiki/NHL_13?oldid=4918"
Community content is available under CC-BY-SA unless otherwise noted.